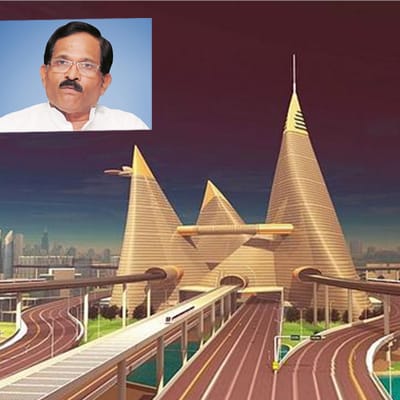 Speaking at conclave, Union minister Naik said, “The slowing down/ saturation of markets in other sectors has also been responsible for directing their interest towards the unexplored defence sector which promises sustained business opportunities.

SAround 500 acres of land will be earmarked for developing a defence aviation hub near the proposed airport at Dholera SIR, said Air Marshal R K Dhir, Advisor, Defence and Aerospace, Government of Gujarat, on Thursday. Addressing the 3rd Defence Conclave here through video-conferencing, Dhir said, “This 500 acres for a defence aviation hub will be connected to the taxiway of the proposed international airport at Dholera.” The proposed airport will have two taxiways. This aviation hub is in addition to the 300 acres that the state government is reserving for MROs (Maintainance, Repair and Overhaul) for aircraft in Dholera SIR (Special Investment Region), he added. Union Minister of State for Defence, Shripad Yesso Naik also attended the conference through a video link.

During a similar defence conclave in 2019, the Gujarat government claimed to have earmarked 200 square kilometres of land at Dholera SIR to set up a firing range for the Indian Army. However, little progress has been made on the ground despite the state government floating a dedicated policy for aerospace and defence sector in 2016 and promoting Dholera SIR as an investment destination for almost a decade.

On the firing range project, the retired IAF official told The Indian Express, “It takes time to implement such projects. We are ready from the state government’s side. The matter is with the Chief of Defence Staff.”

The official spoke about DRDO signing a memorandum of understanding with the state government to set up cyber security lab at Gujarat university in the past. “We may progress on that,” said Air Marshal Dhir.

Speaking at conclave, Union minister Naik said, “The slowing down/ saturation of markets in other sectors has also been responsible for directing their interest towards the unexplored defence sector which promises sustained business opportunities. I have been informed that there are already over 8,000 MSMEs who serve this strategic sector as tiered vendors to Ordnance Factories and Defence Public Sector companies. There is a need to expand this base by hand-holding more and more MSMEs to participate.”