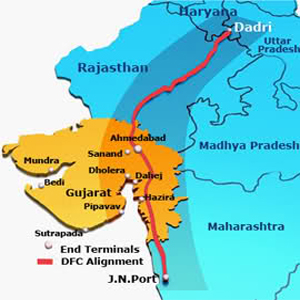 his inspired the then Japanese Ambassador to India to adopt the idea of building an efficient freight corridor along the lines of the Tokyo – Osaka corridor.

The Delhi Mumbai Industrial Corridor (DMIC) was initiated by the Centre for making it a flagship programme, with the aim to considerably increase India’s competitiveness in manufacturing through the creation of world class infrastructure and decreased logistics costs. The idea of the project emerged from China’s preparation for the 2008 Beijing Olympics, which necessitated a diversion of India’s iron ore exports from Japan to China. This inspired the then Japanese Ambassador to India to adopt the idea of building an efficient freight corridor along the lines of the Tokyo – Osaka corridor.

The project was planned and designed to create smart, sustainable industrial cities by enhancing the high speed, high capacity connectivity offered by the Western Dedicated Freight Corridor (DFC) in six states to reduce logistic costs within supporting policy framework commencing at Dadri at Uttar Pradesh and terminating at Mumbai. There are as many as 24 industrial nodes and industrial regions to be developed on both sides of the corridor.

The idea is to provide impetus to the Make in India initiative, supported by Startup India and Standup India schemes. Logistic parks, hubs, solar power generation along the DMIC corridor of 1,500 km are being developed. At many places, work is on at good pace. Uttar Pradesh, Haryana, Rajasthan, Gujarat, Madhya Pradesh and Maharashtra are involved in the project, which has got financial help from Japan.

The primary objective is to enlarge India’s manufacturing and services base and develop the DMIC as a ‘Global Manufacturing and Trading Hub’. Apart from boosting high tech industrial development, it will facilitate a major impetus to planned urbanization with manufacturing as the key driver. Efforts are on for the development of infrastructure linkages such as power plants, water supply, high capacity transportation and logistics facilities as well as softer interventions like skill development programme for employment of the local populace.