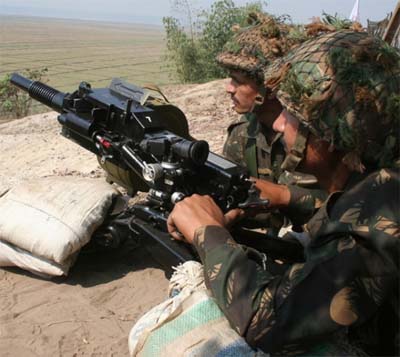 Besides Indian Army and IAF, private defence players will also use the firing range The Gujarat government is working on the Indian Army’s request, to set up a large 200-square kilometers of multi-weapon firing range, at Dholera Smart City - about 100 kilometers from Ahmedabad.

Jai Prakash Shivahare, Managing Director of Dholera Industrial City Development Ltd (DICDL) stated that the said firing range will be built at Dholera Special Investment Region (SIR) on a land area of about 200 square kilometres (sq km). The range will primarily be used by Indian Army and Indian Air Force, but will also be open for private players for testing their defence products.

"The Indian Army has been looking for a firing range. Also, we have received inquiries from defence manufacturing players such as Baba Kalyani Group for the same. Based on their requirement for a firing range with 25 kilometers length and five kilometers width, we have identified a land area in Dholera SIR," Shivahare said here on the sidelines of the second Gujarat Aviation Conclave 2019 organised by Confederation of Indian Industry (CII) on Thursday.

He said that once the firing range is operational, it would help attract other defence manufacturing investments in the Dholera region.

The project has received an in-principle approval from the concerned authorities including the state government.

The identified land for the firing range includes government-owned land as well as some private land too. "We will compensate the private owners for the acquisition of the land. The firing range will be close to the coastline in the Gulf of Cambay,” he commented.

According to Shivahare, there are currently only a few firing ranges available in the country to test the defence products. These include Devlali near Nashik in Maharashtra, Pokhran in Rajasthan, Balasore in Odisha, Trichy in Tamil Nadu, Ichchapore in West Bengal among others for testing various categories of weapons and ammunition.

Initially, the Government was considering two sites - Kutch and Dholera - for the firing range. But eventually, the authorities had selected Dholera.