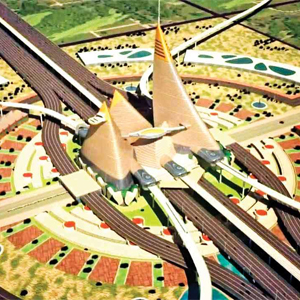 “We are open for all non-polluting industries. Already Tata Group’s two companies – Tata Power and Tata Chemicals are setting up their establishments at DSIR. In fact, Tata Power has commissioned a 300 MW solar power project here. Torrent Power Limited has taken power distribution rights for the upcoming DSIR. One solar panel manufacturing unit is also coming up,” said Shukla, who is also Managing Director of Dholera International Airport Company, which is developing a greenfield airport near DSIR.

In the next five years, DSIR, being developed across 922 sq km, will have excellent rail, road and air connectivity, he said, adding that DICDL is having a huge chunk of land to offer big industries with state-of-the-art facilities. Of the total 922 sq km, 340 sq km are under the coastal regulation zone and the rest 422 sq km will be put to commercial use, of which 15-20 per cent will be green belt, he said.

In fact, DSIR was at the centre of Vibrant Gujarat Global Investor Summit and Defence Expo planned last year, but unfortunately both the events were cancelled due to COVID-19 pandemic, he said. “We are focusing on the EV sector, solar panel makers, defence industry, auto and auto ancillaries, data centre, advanced agro processing industries etc.,” he claimed.

Mammoth work of infrastructure development is going on at DSIR as its area is more than double the size of Ahmedabad Municipal Corporation limits. Already Rs 30 billion have been invested to make the industrial city functional with a target residential population of 2 million and over 8 lakh jobs by 2040. Located nearly 110 km from Ahmedabad, DSIR is having advantage of proximity to Delhi Mumbai Industrial Corridor (DMIC) and Dedicated Freight Corridor (DFC).

State government has also decided to develop a logistic park beside Bhimnath Railway station and it would be connected with DSIR through laying 35 km long tracks. Recently the Cabinet Committee on Economic Affairs (CCEA) approved the Dholera International Airport project. The new greenfield airport in Dholera is planned to be operational by 2025-26 and is estimated to cost around Rs 1,305 crore to be built.